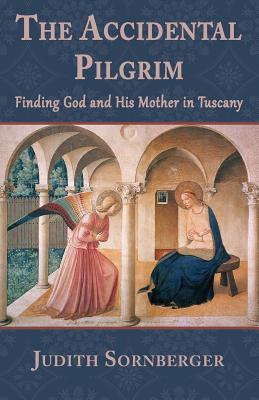 The Accidental Pilgrim: Finding God and His Mother in Tuscany

“One tries to cure the signs of growth, to exorcise them, as if they were devils, when
really they might be angels of annunciation.”
Anne Morrow Lindbergh, Gifts from the Sea

Each morning leaving their cells and each evening returning to them, the monks of the Cloister at San Marco made a small pilgrimage to the Annunciation. The cloister’s monk-artist-in-residence Fra Angelico painted his fresco of the mystery-charged encounter between woman and divine messenger at the top of the stairway leading from the small refectory to the second floor corridors of cells. Ascending to the scene five hundred years later, I pondered several things in my heart. Because the fresco throbbed with detail, because the soles of my feet felt the tickle of the feathery leaves in the walled garden where I could have been standing just outside the portico of their tete a tete, and because I saw the mixture of solemnity and curiosity in Mary’s tucked chin and lifted eyes, I wondered what it would be like to be a woman approached by an angel on a day when all the ordinary things go on as usual--the sun popping over the horizon and the little red and white flowers opening their faces to it--yet everything is altered forever by the entrance of the winged one, the dark rainbow bands of indigo, scarlet and saffron fluttering behind him nothing to the words he has released into the room.

And I wondered about the monks who passed this moment each day on their ways to meals and prayers for four hundred years. How would it shape one’s daily life to live in the midst of such a moment? I almost wrote “a frozen moment,” but there is nothing cold or rigid in their poses, not in the angel’s bow of reverence or in Mary’s echo of that bow, her cloak still fluttering at the hem from the wind of his wings, her wrists and his crossed before their torsos like wings at rest. What might seem possible in this life if I were reminded of that moment as frequently as I am, say, of supersized burgers and Toyotas by the billboards I encounter on my daily rounds?

Fra Angelico also painted a smaller fresco for each monk’s cell: another Annunciation, a Nativity, the Transfiguration, and other scenes from Christ’s life, along with a host of Crucixions (these in the novice’s cells) and several Resurrection vignettes, including a touching rendezvous between Christ and Mary Magdalene outside the tomb, the Noli me tangere. Angelico intended his paintings to be instructional devices and regarded himself as a humble tool in God’s hand. While his artist peers adorned the ceilings and walls of great cathedrals where thousands would admire their work, ballasting their reputations, this monk preferred to work within the narrow enclosures of his monastery. How could I not believe in that humility, knowing that he painted each of these smaller frescoes for a primary audience of one—whatever monk occupied the cell in which it breathed its colors? And standing alone in the doorway of each cell, how could I fail to be moved by his beautiful industry, not take it personally? How could I not allow myself to be worked over?

I liked imagining Angelico going about his day’s work--preparing the plaster and mixing the colors from powdered earth pigments each morning, instructing his helpers. Each day he would work in one small section of the fresco, covering only that area with the plaster. This area was the giornato, the day’s allotment of plaster, for in creating frescoes the paint is applied onto wet plaster and becomes one with it, much the same way that our lives and souls become inseparable from what we paint onto the surface of our days.

Visiting the cells, I wondered how differently one might face each day if one awoke to Mary Magdalene reaching out to the risen Christ as opposed to waking beneath Christ’s limp body hanging from the cross, rivulets of blood still flowing from it. How was it decided who slept where? The novices’ cells were all Crucifixions. Even walking down that corridor was painful; how was it for them, I wondered, young and away from home for the first time, to room with such suffering? It almost seemed a kind of hazing. Perhaps, however, they were given the Crucifix as their nightly companion as a mercy--a way of reminding them that there is greater suffering beyond homesickness and lonely nights, that pain such as theirs leads to redemption. Perhaps daily commerce with that image allowed them to begin to consider pain—their own and others’—a lingua franca.

But what about the others? Did they sleep their entire lives following their novitiate under a single image? Did the monks ever vie for a particular cell? Did they rotate? Did they dare to allow themselves to covet their neighbor’s quarters? Were particular images selected for certain monks because of some attribute of faith it was deemed they needed to cultivate? Or was it simply a matter of what cell was available when it was time for a novice to evacuate what I called the Corridor of Crucifixions? Even though this had been all-male territory and no one lived there anymore, I found myself picking out the cell I would have chosen if choice had been allowed, an exercise in imagination like the ones my sisters and I had reveled in whenever our family went house hunting. Each house became our own as soon as we walked inside, my sisters and I racing past the living room and kitchen to find “our” bedrooms and imagining the new lives these new rooms would engender. Was it like that for the monks? Did they imaginatively insert themselves into the rooms within rooms of these frescoes, see themselves transforming in their presence?

Cell three would have been my choice, the one with Angelico’s most minimalist Annunciation, far simpler than the more public one in the hallway. A waif-like Mary kneels in a room that is bare but for the compassionate-looking angel facing her. Both figures cross their arms before their hearts, as if to contain both fear and wonder. At least it was the cell I would have chosen for that moment in my life. Having recently felt compelled to worship in a Christian church after a twenty-year sabbatical from Christianity, my heart had fluttered with the same confusion I read now on Mary’s face. I too was bewildered by what had seemed a calling.

There must be hundreds of Annunciation’s in Florence. I counted four by Fra Angelico in the Cloister of San Marco alone. I knew I couldn’t come close to seeing them all, yet each day I trooped out to at least one church or museum, pockets jingling with 500-lire coins for the vending machines that let there be light on the paintings. I saw Annunciation’s by Martini, Botticelli, Donatello, Ghirlandaio, Fiorentino, del Sarto, Baldovinetti, Leonardo, and da Forli. Each time I approached one, my spirit hushed. In my mind I heard the lines from my favorite Christmas carol “O Holy Night”: “Fall on your knees./O hear the angel voices.” If I could make my soul quiet enough, I thought, would I hear the words quivering in the gold-leafed air between the figures, perhaps hear beneath them Mary’s heart beating as swiftly as a dove’s?

Each day over the last five hundred years, despite whatever horrible things human beings were doing to one another all over the surface of our planet, here in Florence the angel Gabriel has been whispering words of hope to Mary, imploring her participation in a miracle of redemption. And she has been pondering, answering, assenting. Regardless of what has gone on outside each painting’s perimeters, horrors too often sanctioned or even sponsored by the Church that had commissioned many of these works, a contract was being made between the human and the divine. However much ugliness there was in the world, in hundreds of squares of light an angel’s wings settled their rainbows into stillness and an invitation was dropped to the earth.

"A feast for the soul and a book of wisdom, this collection is the perfect present for everyone on your list." Alison Townsend

I Call to You from Time

"A book of unexpected annunciations and epiphanies."

"Plunged into a landscape where there are no maps, Sornberger creates her own, wringing beauty from tragedy in these radiant, searching, and indelible poems."

The Accidental Pilgrim: Finding God and His Mother in Tuscany